Following the flames: studying post-fire debris flows and floods along the mountain-urban interface

You have probably seen it repeated during many California winters. A major storm is about to lash the state like a firehose. Evacuation orders are issued to residents in and downstream of burn scars due to the potential for hazardous torrents of water and sediment rushing out of normally dry creek beds. Drought is a common feature of our warmer months commonly causing vegetation in our steep mountains to burn. Burning vegetation and soil makes the landscape more prone to erosion and less able to absorb water. During intense but typical winter rainfall events, these burned areas can be prone to flash floods and debris flows in what is referred to as the fire-flood cycle (Rice, 1974). Debris flows are particularly hazardous because these are essentially 50/50 mixtures of water and sediment capable of inflicting far greater damage than floodwaters alone. Debris flow events have a deadly history in California, with the most recent disaster being the Montecito debris flows back in January 2018 which tragically claimed the lives of over 20 people and destroyed hundreds of properties (Kean et al., 2019). Studies have shown both through modern observations and model forecasting that wildfire extent and severity is expanding (Williams et al., 2019), and climate change in California is expected to amplify our wet-dry cycles over the remainder of the 21st century in what is referred to as ‘precipitation whiplash’ (Swain et al., 2018). This means that dry periods are becoming drier, likely exacerbating wildfire, and wet seasons are becoming wetter, driving up post-fire hazards. 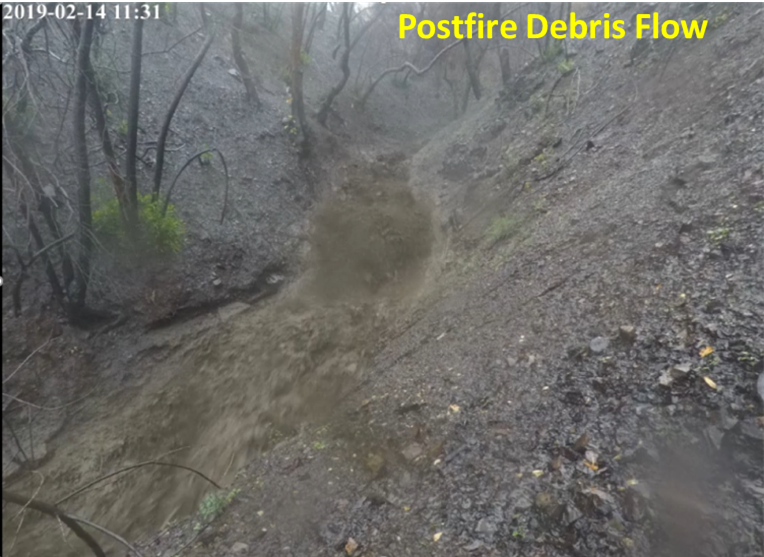 The science of post-fire debris flows

Thanks to research of many geologists and hydrologists, much of it steered by the US Geological Survey Landslide Hazard Group, we have a much better understanding of the mechanics of post-fire debris flows. A lot of this work comes from studying fire-flood cycles in southern California where almost every year the threat of post-fire debris flows exists somewhere in a recent burn scar. Outside of recently burned areas, debris flows commonly initiate from shallow landslides in steep mountainous terrain caused by soil saturation during long precipitation events. However, in recently burned areas, rainfall cannot be as readily absorbed so it becomes runoff, which during intense short-duration bursts of rainfall can quickly bulk up with sediment as it travels down hillslopes and creek bottoms. This understanding has allowed for the development of tools to screen areas most susceptible to debris flows, which are especially accurate in the mountains in southern California where the model was developed. Unfortunately, there are generally no reliable or cost-effective means to prevent debris flows from occurring in these areas. The best lines of defense are sediment catch basins built at the mouth of canyons draining steep terrain. However, in the event of large debris flows being generated there is no guarantee that this method can hold back these torrents of water and sediment, therefore evacuation orders are commonly issued to the most vulnerable residents. Despite southern California being so data-rich when it comes to observations of these events, more information is needed to constrain predictions on the volumes of material produced and delivered to infrastructure downstream. Flows emanate from very steep and less accessible mountainous terrain, which makes detailed observations difficult to acquire. Yet, more observations are necessary to constrain these volumes and their relationship to watershed biophysical factors and triggering factors such as rainfall intensity and storm types. 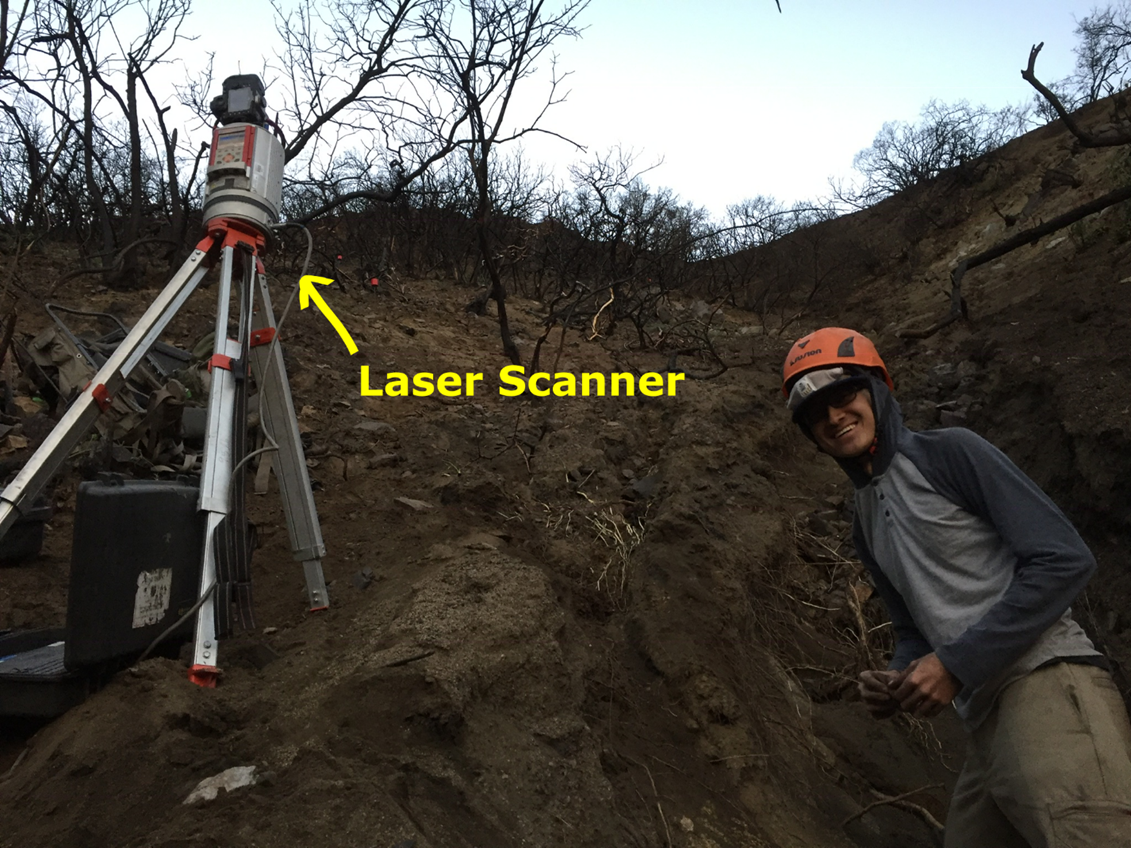 Our work to improve understanding of post-fire erosion processes

Modern techniques address these gaps by acquiring data more easily, accurately, and across a larger scale. In a study recently published from our group in the Gray Watershed Hydrology and Earth Surface Processes Lab, we used ground-based laser scanning and unmanned aerial vehicles to map surfaces subject to erosion during a full post-fire winter in the 2018 Holy Fire burn scar near Lake Elsinore, CA (Guilinger et al., 2020). This close-range laser scanning allowed us to resolve erosion the order of millimeters to include even some of the smallest scale processes such as rain splash and micro-channelized erosion. By being able to see the full range of erosional processes that could contribute sediment to post-fire debris flows, we could begin to tackle a wide range of research questions, beginning with the most fundamental: which erosional processes were responsible for most of the sediment transport? How did sediment contribution from these different processes change over the course of the wet season? 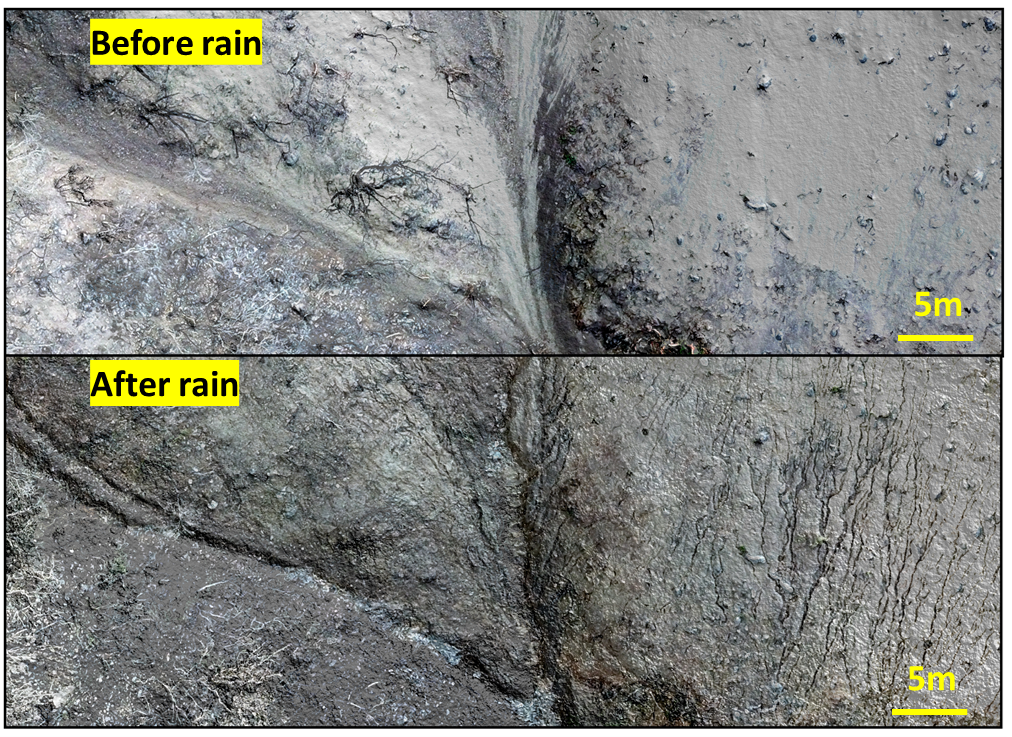 What we found was that gully and stream channels that eroded on the order of meters into the subsurface were responsible for most of the sediment during the first few storm events after fire. Later in the wet season, the dominant erosional mechanisms shifted to shallow hillslope erosion, which supplied less overall sediment to these flows. This occurred because soil on these hillslopes has a finite thickness and once erosion cut down to harder bedrock, sediment supplies decreased. We documented additional contributions from erosion along the sides of channels, but these contributed much less sediment. This work supports other observations of sediment supply “depletion” (Tang et al., 2019) but is unique in that it is one of few studies that documents it over the course of multiple erosion events, and in a single wet season. An important upshot of this work is that erosion during the first few major storm events is the most critical time in terms of downstream sedimentation hazard and that the nature of post-fire hazards changes rapidly from storm to storm. 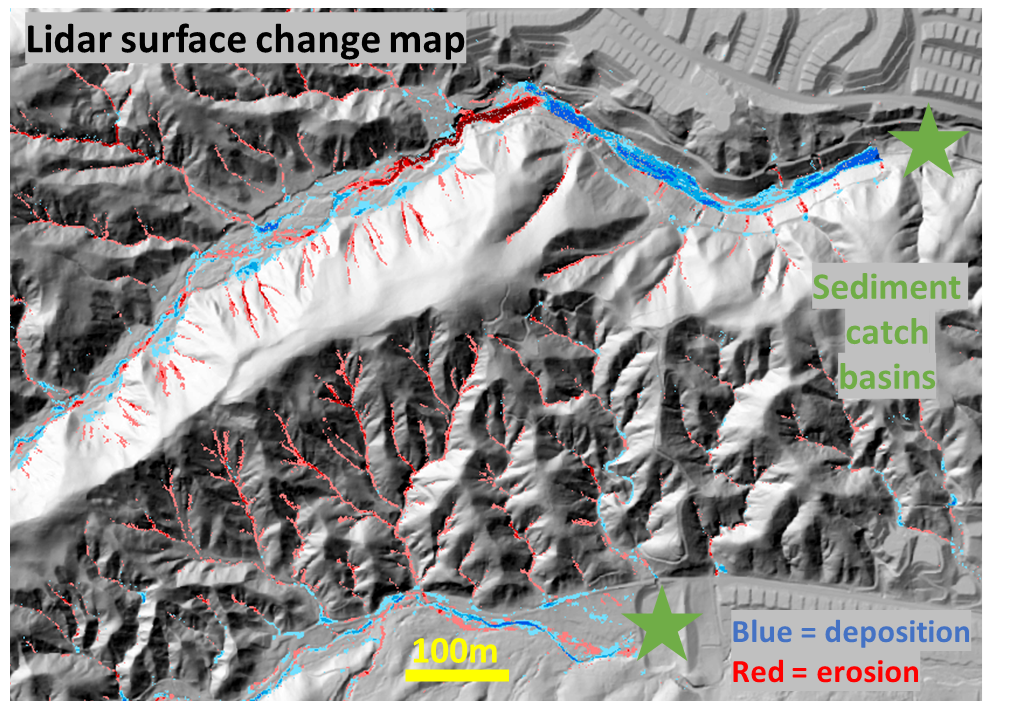 Thanks to funding from the Joint Fire Science Program and efforts of Riverside County Flood Control in acquiring airborne-based laser scanning datasets between storms over much of the Holy Fire burn scar, we are now moving forward with a similar analysis over a broader scale. Airborne laser scanning, also referred to as lidar, is becoming increasingly common in its spatial coverage. We have ongoing work to repeat similar analysis across a range of watersheds to explore controls on the degree of erosion and efficiency of which sediment is transferred to downstream communities. Expanding on this, the final goal of my dissertation would be to push into other fires that have repeat lidar in order to improve our understanding of post-fire sedimentation magnitudes. From this work, we will develop tools that could further assist in emergency hazard planning and stormwater engineering as Californians contend with a future where wildland fire will likely be more common in our local foothills.

Rice, R.M., 1974. The hydrology of chaparral watersheds. in: Rosenthal, M. (Ed.), Symposium on Living with the Chaparral. Proceedings of the Sierra Club, Special Publication, pp. 27 – 34.