By: Stuart Schwab, PhD Candidate in Botany and Plant Science 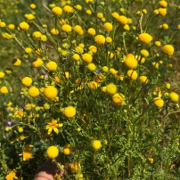 Climate change and the impact of human activity are causing drastic and concerning losses in ecosystems across the world. Despite these worrying losses, restoration provides hope for mitigation of some of the damage. Natural ecosystems have an ability to recover on their own; however, recovery is often impeded by invasive species. A common issue preventing recovery is invasive species- which are estimated to cost 120 Billion a year in damages and removal efforts, in the US alone.

For my dissertation, I am asking how the impacts of invasive plants prevent recovery. I am examining a locally expanding invader, Oncosiphon piluliferum, or stinknet. This plant is called stinknet because it produces a foul odor and forms thick stands that can expand across entire parks. A single plant is pictured at right. One of those yellow balls (inflorescences) can hold hundreds of seeds. Below, there is a landscape shot demonstrating how dominant and problematic this plant can be.  This is a newer invasive species, so we do not know what it’s exact impacts are, and how it may be preventing recovery- which is integral to understanding how to establish other plants to mitigate some of the ecological and conservation damages caused by this invader. 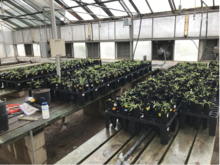 A common issue preventing plant recovery in native grasslands is the soil community. Soil communities include beneficial symbionts that help plants grow, as well as harmful pathogens that can slow growth or even be fatal for plants. These soil communities can be changed by a variety of factors, but I wanted to figure out how stinknet was interacting with the soil community to potentially continue to impede native species growth and recovery. I grew six native species and stinknet in a greenhouse experiment, with soil from areas that had variable amounts of stinknet for differing amounts of time, to see how the intensity of stinknet soil impacts change over invasion. To address stinknet soil impacts, I grew 1,008 plants in a greenhouse (pictured to the right) and measured key responses including shoot and root growth. We found that native species began to grow progressively worse in the more stinknet impacted soils- suggesting stinknet may be reducing the number of beneficial symbionts that native plants need.

My second project shifts gears a bit to focus on how stinknet responds to land management practices. In grasslands, land managers often set small fires- called prescribed burns- to reduce the amount of invasive grass litter and invasive grass seedbanks. This practice dates back thousands and thousands of years, as indigenous peoples in California had practiced cultural burns for centuries prior to European arrival. These cultural burns removed litter layers naturally present, allowed for new growth and prevented large fires. The current practices are much more focused on invasive grasses from Europe (as the indigenous people did not have invasive grasses yet) and is a very effective method to reduce grass and allow new growth (see left side of road vs right side for prescribed burn effects removing dead litter).

One issue though, is that we do not know yet how invasive forbs are affected. Forbs, non-grass-like broadleaf herbaceous plants, are less dry, and have more woody stems than grasses, so they are not as readily consumed in fires. In Lake Perris State Park, the land managers set a 226 acre prescribed burn in June 2019, and found stands of singed stinknet left afterward. 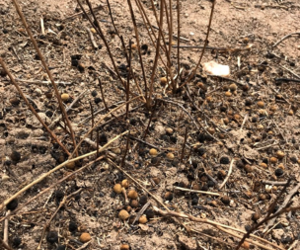 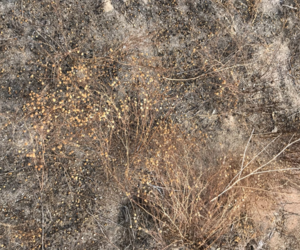 These stands had intact seeds (top left picture) and intact litter (top right) that might be acting to shelter stinknet seedlings. We wanted to see how these stands may be preventing recovery and the effectiveness of prescribed burns as a management technique.  We started an experiment to tease apart the effects of the litter, stinknet seedbank, and how these stands may be preventing natives from re-establishing by adding native seeds. In our first year of data, we found evidence that both the increased seeds and the litter itself increased stinknet abundance. We also found that adding native seeds increased the proportion of native species, but that it’s effectiveness is reduced by the intact stinknet stands.

Overall, stinknet is an aggressive invasive plant that will be very challenging to get rid of. I hope to provide information about how to initiate recovery in some key location- such as crucial habitat for other species like the Stephens kangaroo rat (burrow with stinknet seedlings pictured below). 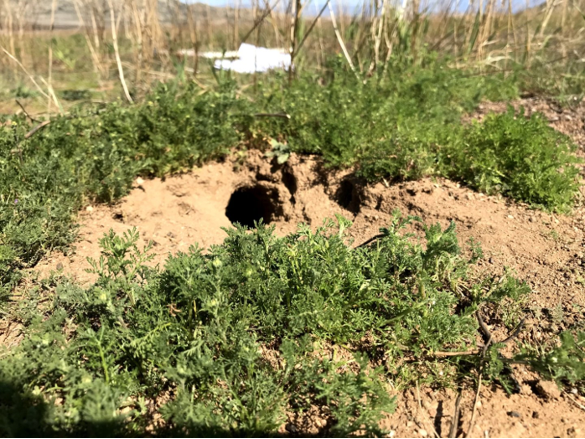