Charlene the Chuon: A new way to communicate the wave-particle duality ... to kids!

Quantum physics introduced me to the world of science communication. After taking a general physics course, I was required to do a project related to any of my coursework as part of my undergraduate honors program. Usually, students picked the physics professor, Professor Yaverbaum, as their advisor because he was less strict than others and allowed students to write a simple paper. But, after taking his physics course, especially in conjunction with a course on Einstein’s special relativity called “The Physics of Time Travel”, I was inspired to do something more than a paper.

At this point in my college career, I was not fully immersed in the world of science. I was still upset about not going to art school and had thoughts about going to law school after graduating. So, this project was an opportunity to marry my interest in science with art, and the first time I discovered SciArt. It was also an excuse to try out claymation…something I had always wanted to do, but also I could not seem to justify spending hours on sculpting and animating when I had heaps of biology, chemistry, math, and physics I could be studying. This claymation about Einstein’s Light Clock thought experiment marked the start of my burgeoning passion for science communication.

I continued to work on various small projects with Professor Yaverbaum, but as my time in college was coming to an end, I pitched my dream science communication project: a science children’s book. Luckily, my enthusiasm led to a very quick “yes”. We spent months writing, illustrating, and perfecting our book, “Choose, Charlene!”, a story about the renowned quantum physics double-slit experiment presented by a fake particle named Charlene, the Chuon. 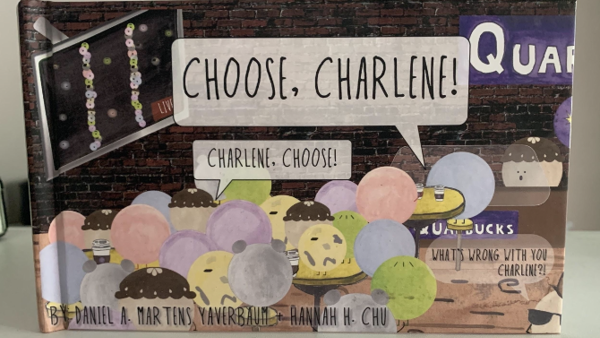 We created a book that not only entertains a young audience with its fantastical tale of a particle trying to make a decision, but also introduces a scientific concept that they may not fully comprehend until they are older. While it may seem silly to try to explain the wave-particle duality to a 4-year-old, Elaine Wilson, a Senior Lecturer in Education at the University of Cambridge suggests when teaching concepts between the ages of 3 and 13, reinforcement of complex theories must be sustained throughout key learning stages. Wilson believes that students need to be exposed to scientific concepts at a much earlier stage in education and progressively build on the framework that was introduced during early childhood. As a student matures, new details of each concept can be added, allowing for a gradual digestion of complex theories.

Although we knew this book would be an asset to young children, what about teens and adults? As a culmination of all the work put into creating this book, we decided to perform a quick-and-dirty experiment to test whether the book would impact comprehension of the particle-wave duality. Groups of students from various majors were presented with different wave and particle GIFS and asked to choose whether the motion would be considered a wave-motion, or a particle-motion. The students took the survey before and after reading the book.

To our surprise, after reading “Choose, Charlene!”, most students changed their answer from a wave motion being “staggered oscillations of many particles”, to “movement of a single element.” In short and without pages of physics gibberish, we were able to convey to students that (spoiler alert) Charlene is modeled after a subatomic particle called a boson! Although bosons had not been introduced to the students yet, they were able to answer the survey questions correctly after reading the book.

This children’s science book remains one of my favorite science communication projects. Not only was it so much fun to illustrate, I also learned a lot about the ins and outs of particle physics. Prof. Yaverbaum and I have shared this book with some K-12 teachers and the reviews have been really positive from young students. After this project, I have continued to develop ideas for other children’s books, especially one related to my current research: insect hormones. For now, I hope you all enjoy reading “Choose, Charlene!” as much as I enjoyed working on it!