Evolution is a tricky topic to unravel. Trying to understand gradual changes that take place throughout the existence of… well, life itself, is no easy task. Over the course of eons, species will die off or adapt to better suit the changing environment. These adaptations come in the form of heritable characteristics, acquired over generations, that contribute to an individual’s ability to survive in their environment. But what do I mean by that?

Let’s use mice and cats as an example. Imagine that you have a population of mice living in a dark alleyway that is being hunted by the neighborhood cat. These mice are all born with different-colored fur, inherited from their parents, that is encoded in the DNA of each mouse. This is an example of a heritable characteristic.

The environment that these mice live in is pretty dark, isn’t it? It looks like the mice with the lighter fur color are way more visible in this environment, and thus would be easily picked out by the cat. As time goes on, more of the lighter-colored mice are hunted down, resulting in a population that looks more like this:

There may still be some variation in the color of the mice, but not nearly as much as in the previous population. The mice that are not hunted down will survive to pass their DNA onto their children, having their children inherit the DNA that codes for a darker fur color. This is a very simplified way to explain how evolution works -- populations changing, through heritable characteristics, to better fit their environment. This analogy can’t fully explain how complex evolution is, but it’s a good start.

Populations evolve at wildly varying rates. After all, it took thousands of millions of years to get from single-celled organisms to those we see on the regular, like birds, cats, and humans. But, as I implied in the title of this post, there are organisms that can evolve much faster than that. My favorite example of those? Microbes.

Microbes, such as bacteria, fungi, and viruses, are everywhere. One of the biggest challenges facing doctors today is the ability of bacteria to evolve resistance to many antibiotics, which can cause severe hospital-borne infections. A fantastic (and horrifying) example of how fast these critters can evolve is from an experiment conducted at Harvard Medical School, resulting in a video that you may have seen:

In 1.5 weeks, this bacterial population went from having no antibiotic resistance to being able to grow at 3000x the minimal inhibitory concentration for this strain (middle of the plate). And again: these are heritable adaptations. The growth you see on the plate is not ONE bacterium. It is a population of several bacteria, passing their DNA and the adaptations that come with it to their offspring so that they could continue growing.

This begs the question: how are microbes able to evolve so quickly?!

1. Microbes have a higher mutation rate. Let’s break down this point a bit by going back to the mice with different colors of fur.

Throughout an individual’s lifetime, these sequences can spontaneously change. This is because sometimes our body makes errors when replicating our DNA, and our resulting cells will have a slightly different sequence. This change is called a mutation. Most of the time, our body can detect when these changes are made and can correct them so that these mutations do not affect us. But microbes lack many of these mechanisms, causing changes to occur rapidly in their DNA. Many of these mutations can cause the microbe’s heritable characteristic to malfunction, leading to the death of the organism. However, this can help introduce new characteristics that are better-adapted for the environment. Let’s go back to the example of antibiotic resistance.

Antibiotics generally target a specific protein that microbes produce, in order to stop the microbe from replicating itself. But just like with the cat hunting down the mice with lighter fur, the bacteria that are left behind after the antibiotics are used have specific mutations that allow the bacteria to survive. Because microbes can mutate much faster than other organisms can, the likelihood of this happening is much higher. There is a huge variety of DNA sequences, even among the same species of bacteria. Turning back to the video I showed you earlier, this is how populations of bacteria can “bounce back” after encountering antibiotics -- the ones with resistance survive and quickly dominate the population. For anyone who has taken antibiotics or knows people who are taking antibiotics, this is why you must take the full course of antibiotics for an infection, even if you feel better, or why antibiotics should only be used for particular situations. This will help limit the population of resistant microbes to a low enough level to allow your body to combat the ones that do end up surviving.

2. Microbial populations can grow rapidly! E. coli can take as little as 20 minutes for the whole population to double in size. This rapid rate of producing new individuals means that if any individual bacterium has a genetic adaptation to their environment, that individual will quickly multiply and dominate the population. (Don’t worry -- bacteria don’t multiply as quickly as in the GIF!)

When thinking about microbes’ high mutation rates, their ability to replicate rapidly makes for a dangerous combination. Again, if one microbe gains a change in their sequence that allows them to adapt to their environment, such as higher antibiotic concentrations, that microbe can quickly proliferate.

3. Microbes can acquire new genes. Imagine being able to pick up a piece of DNA and incorporate it into your own genetic material without any help. Genetic engineering techniques aside, humans are not able to do that on their own. But microbes will often pick up new DNA or give DNA to other microbes, in a process called horizontal gene transfer. Microbes can pick up DNA from its surrounding environment, such as from cells that have died and released their genetic material. This is another way that bacteria can gain heritable characteristics -- they can pick up characteristics of past organisms to use as their own! 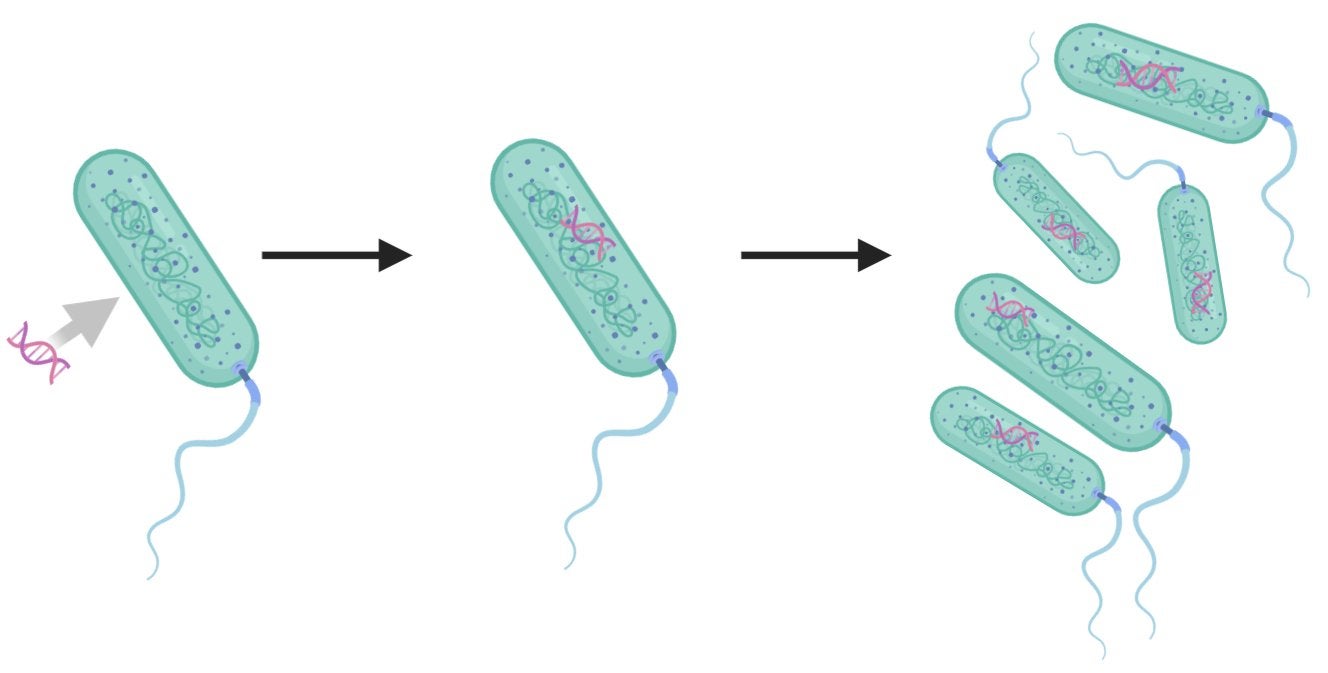 This is very common in situations where many different types of microbes are present, such as in your gut and in oceans. In fact, many heritable characteristics that are responsible for enabling resistance to particular antibiotics (such as the production of a protein that can break them down) are constantly circulating in the environment. Some researchers are dedicated to determining the origin of such genes and figuring out how we can prevent them from moving into strains that would harm us.

Microbes are capable of amazing feats. Because of these unique features of microbes, they are capable of evolving fast enough for us to be able to observe evolution before our very eyes. And while issues in antibiotic-resistant strains of microbes seem frightening, researchers are looking for new technologies and ways to combat diseases without using antibiotics. Aside from that -- because microbes evolve so quickly, it’s very difficult to understand just how diverse these microorganisms can be. But I hope that this article helps you understand that amazing things are happening at the microscopic level!

Non-GIF images made with BioRender.