Ants are some of the most widespread and numerous insects on Earth, making up an estimated 15-20% of all terrestrial animal biomass. Along with their dominance of so many different habitats, ants contribute significantly to the modification and maintenance of ecosystems. Ants are considered ‘ecosystem engineers’, which means that they change the biological, chemical, and physical properties of the habitats in which they live. Many ants nest in soil, which they modify through foraging and nutrient cycling, as well as nest excavation. We know that ants modify the soil in and around their nests, but not the extent to which this occurs in different ecosystems. ​I am a Ph.D. student and I’m interested in how physical factors that vary between ecosystems, like temperature and precipitation, play a role in how ants interact with the soil of those ecosystems. To investigate this, I’m conducting a study with data from two California mountain ranges: San Jacinto and the Sierra Nevada. 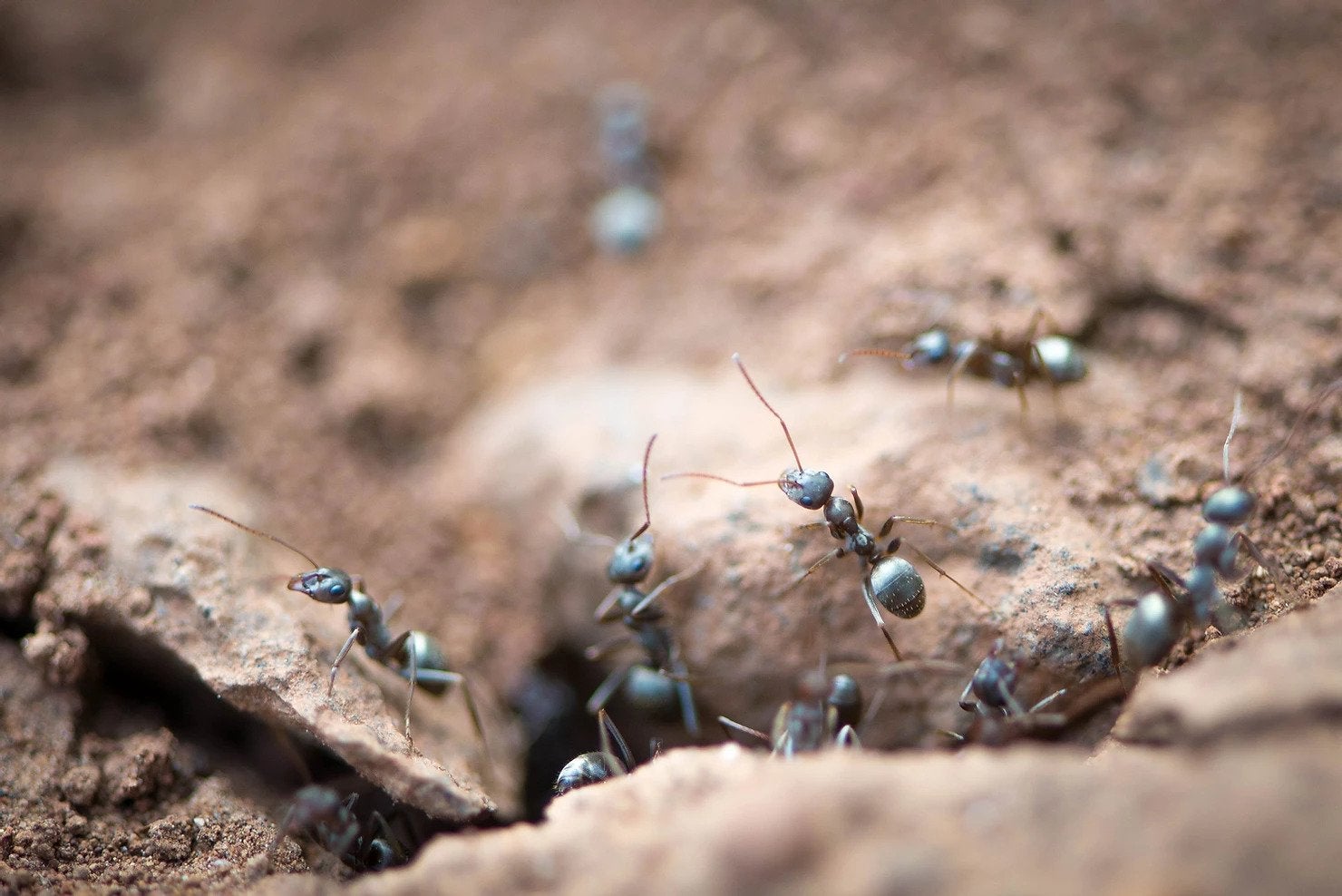 To investigate the properties of nest soil across various ecosystems, I took advantage of elevational gradients. Elevational gradients extend across the high and low areas of mountain ranges, making it possible to study a species in a relatively small geographic area, but across various natural temperatures and precipitation levels. For my study, I am investigating the nest soil of three ant species across the San Jacintos and Sierra Nevadas. 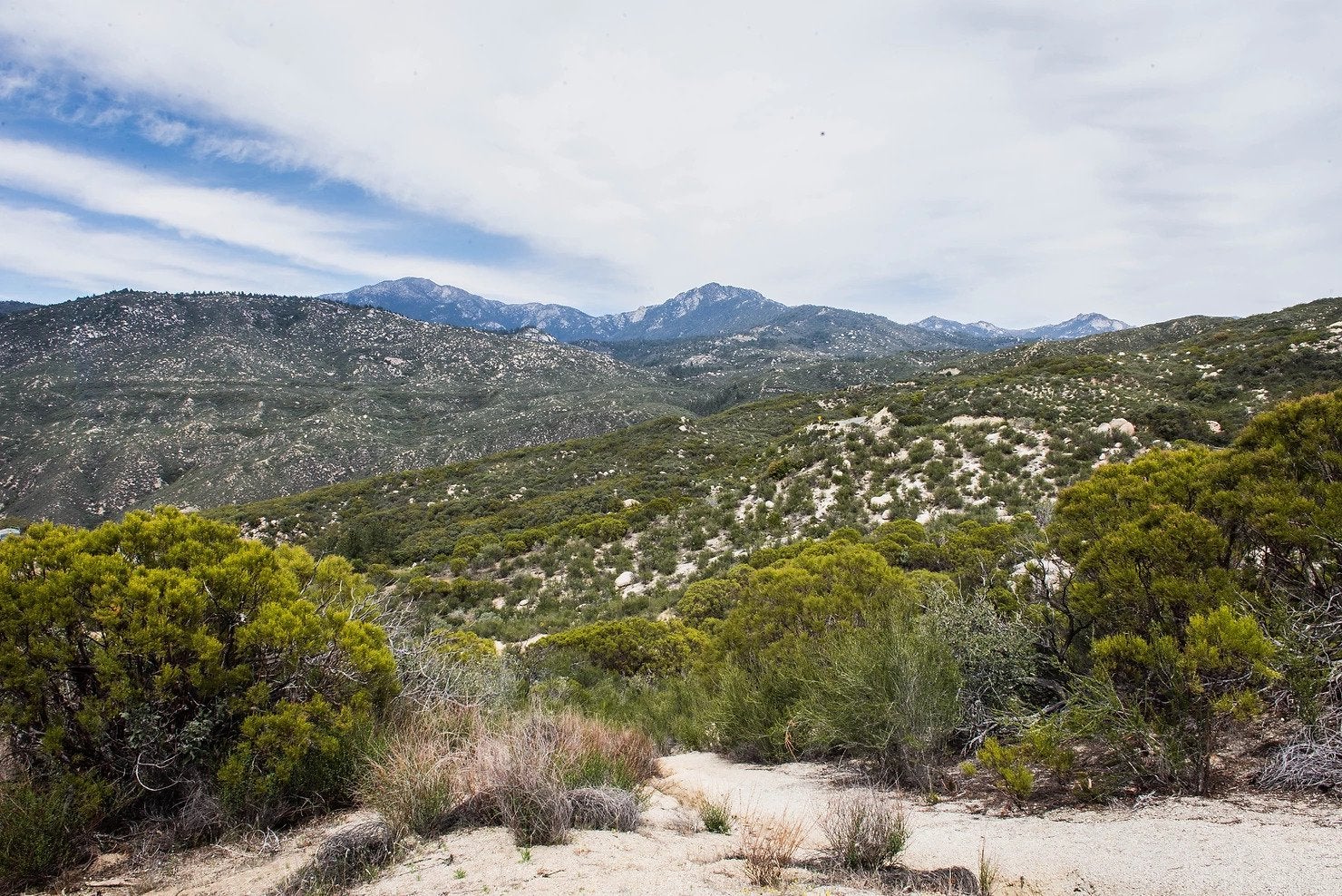 In the summer of 2018, I set out into the field to find nests and collect soil from in and around them. This consisted of a lot of driving around to sites at various elevations and looking for nests. Once I found a nest, I marked its location on my GPS. I did this for 50 nests in each mountain range. After I was sure that I had a large enough sample size with good coverage across an elevational gradient, I revisited each nest to collect data. This consisted of collecting eight workers for genetic analyses, soil from the nest itself, and soil from a control area at least 10 m away from the nest. 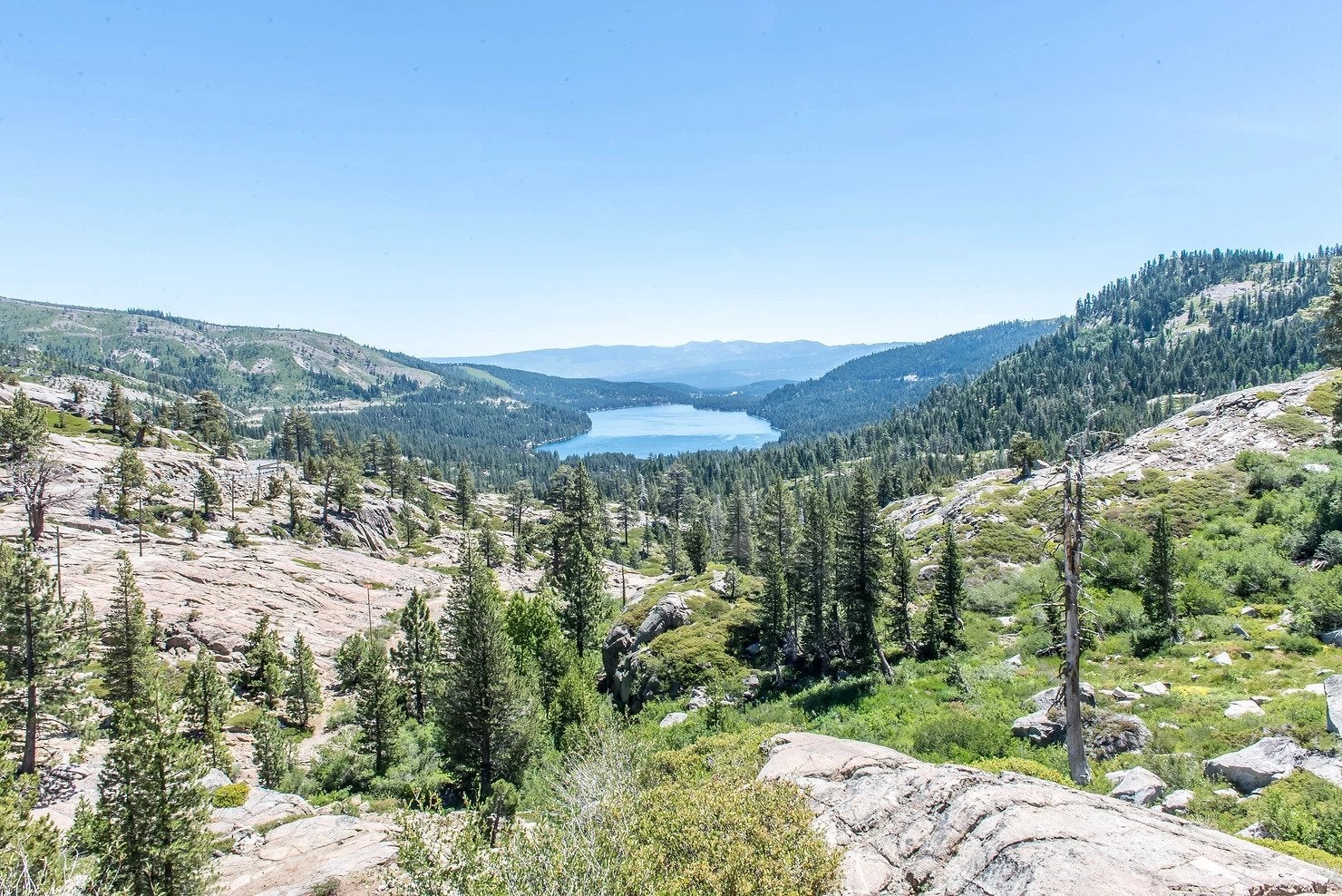 In order to estimate how large these colonies are, I used a technique called mark-recapture on a subset of colonies in the elevational extremes of my study sites. In this protocol, I collected as many ants as possible in 30 min increments throughout a day, painted spots on them with bright enamel paint, and released them at their nest entrance. The next day at the same time, I went back to those nests, collected the same number of individuals, and counted the proportion of those individuals that were painted. This approach gave me an estimate of colony size based on a calculation called the Lincoln Index. 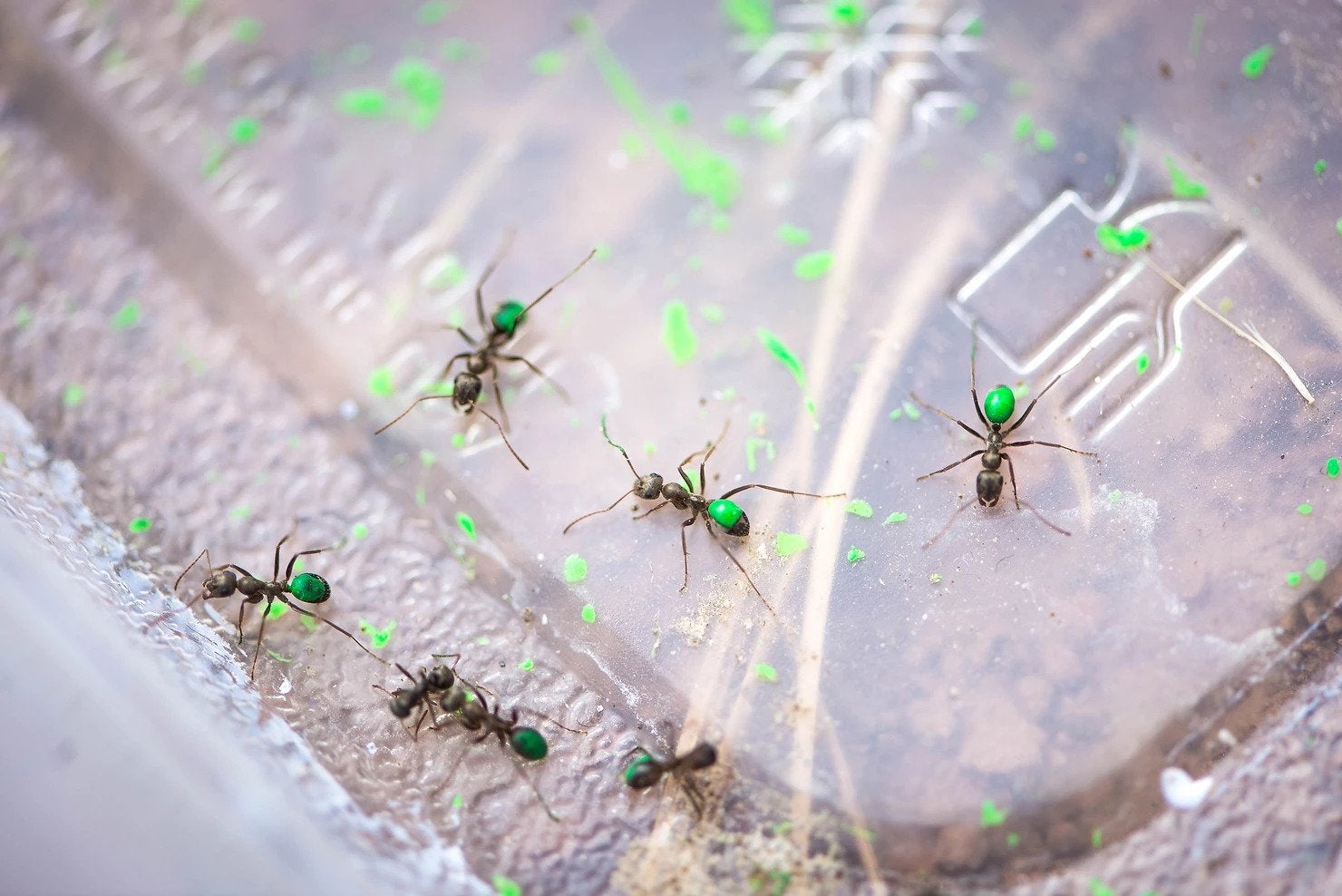 The Sierra Nevada portion of my fieldwork took three weeks, and during that time I stayed at the University of California (UC) Berkeley Sagehen Creek Field Station. This research and teaching facility is located in the Central Sierra Nevada north of Truckee. The station is embedded within the 9,000-acre Sagehen Experimental Forest, one of the locations I included in my study. While I was staying there, I got the opportunity to meet students from UC Berkeley who are also studying entomology. Additionally, my mom assisted me with some of my fieldwork and was a huge help! Thanks, mom! I’m lucky to be able to study a topic that is fascinating to me while working outside and exploring some of the most beautiful areas of California. 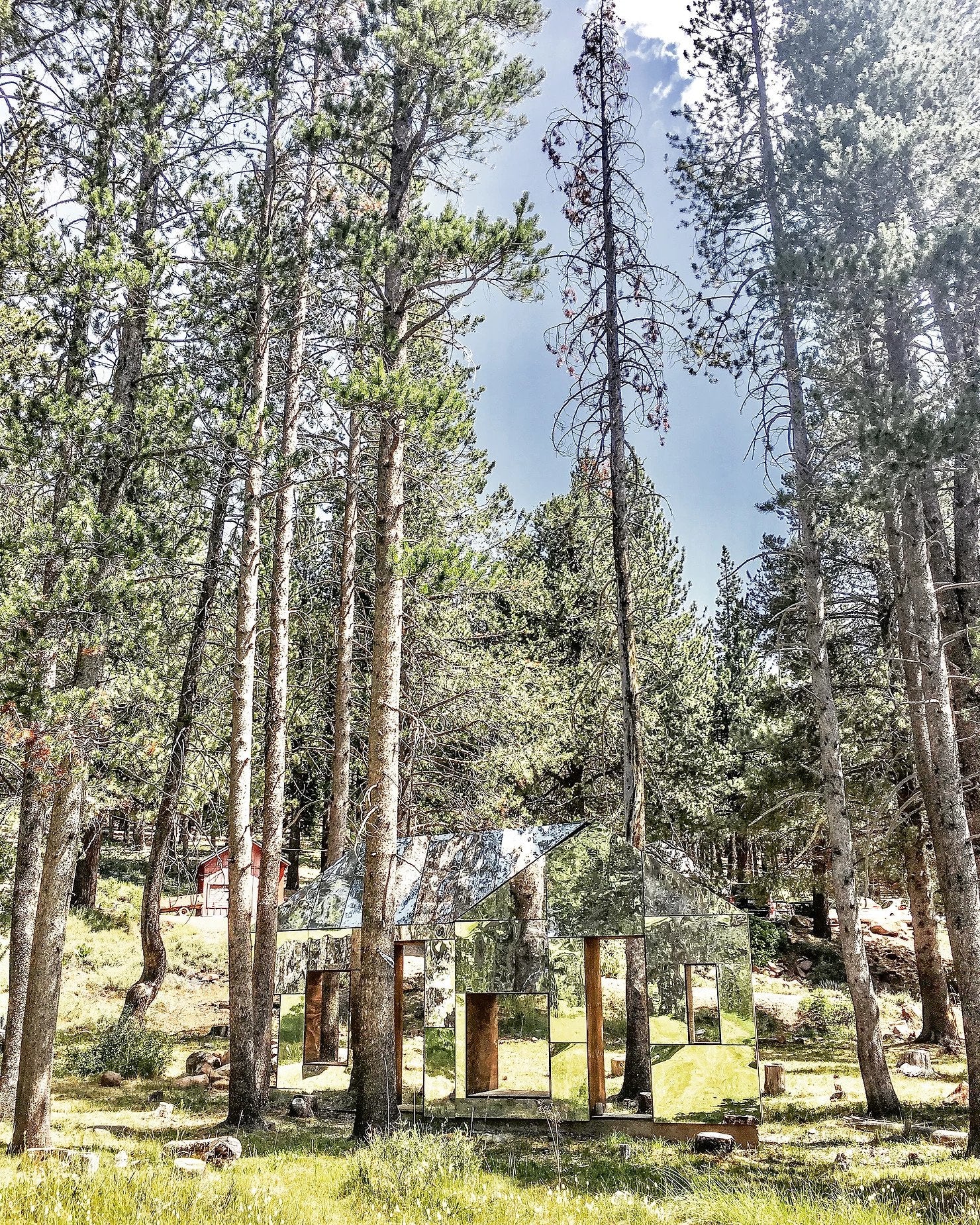 After I collected the ants and soil, I measured the moisture and carbon/nitrogen content of the soil samples. Carbon, nitrogen, and moisture can significantly impact plant decomposition and nutrient cycling. These data will give me information about the role that environment plays, if any, in the extent to which ants modify the soil in and around their nests.

My results suggest that climate plays a critical role in the extent to which Formica ants alter the soil that composes their nests. What significance does the interaction result have for the impact of this study? In other words, why might ants increase C/N at high elevation and seemingly decrease it at low elevation? My hypotheses: (1) The sample depth of 10 cm may not capture the full extent of ant-impacted soil. (2) Ants may dig beeper nests at lower elevations due to less eroded/compacted soil, so their soil modifications could be occurring at greater depths. I'm currently collecting soil cores from deeper within nests to investigate further. Check out an overview of this project in this poster I made for our UCR Entomology Student Seminar Day this year: 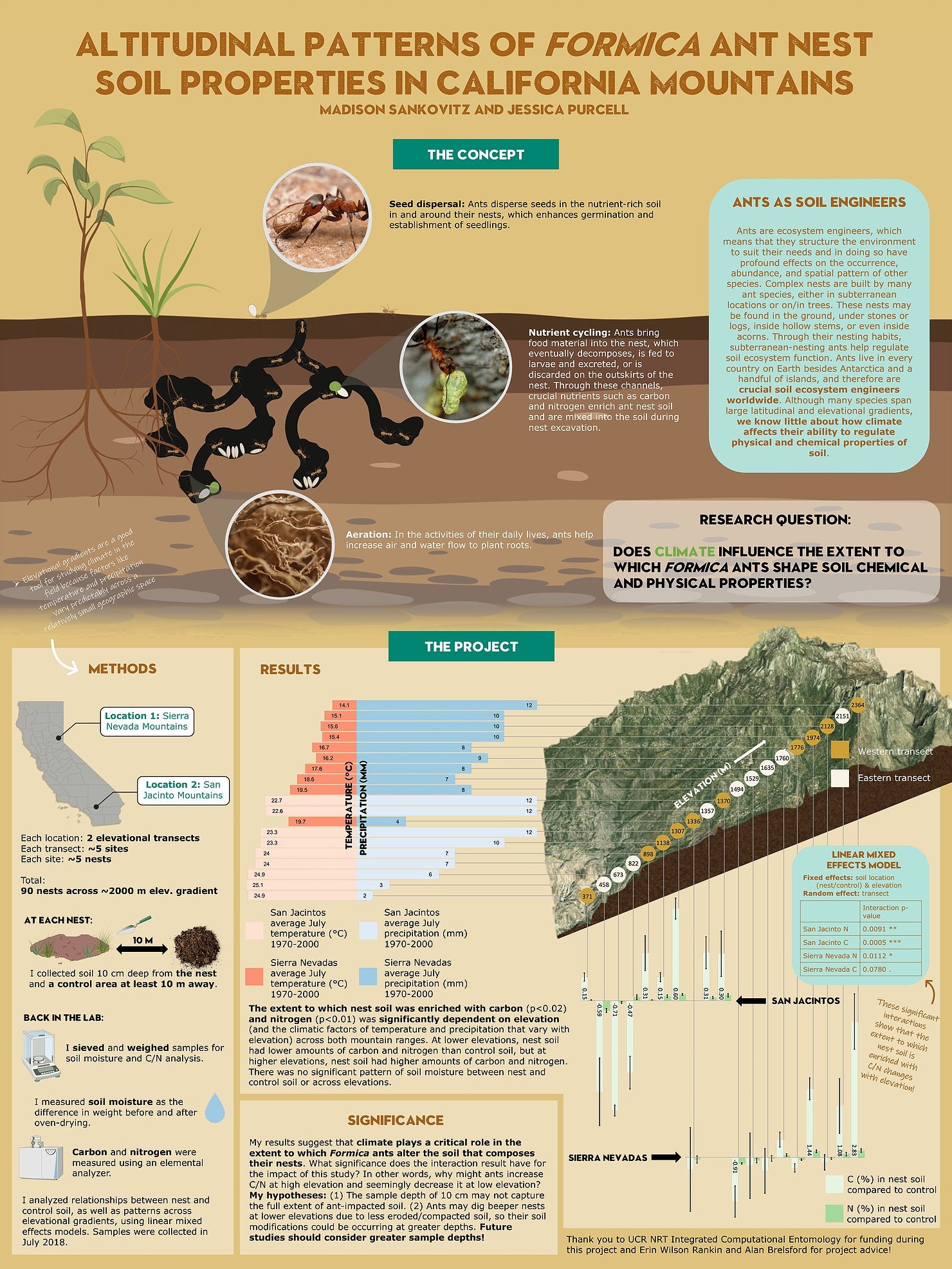